I have an iRiver. It’s fugly. Even its name is an aesthetically displeasing admission that the sole reason for its existence is to divert market share from the mighty iPod family.

You buy an iPod from a smiley, smart-casual white person in an authorized Mac dealership where the shelves are cleaner and brighter than those in most labs I’ve worked in. You buy an iRiver from a sulky, gawky Asian kid in a shop modelled after a market stall in Bladerunner. You haggle. His fingers perform a ritual dance on an oversized electronic calculator. When you’ve bought it and finally prised it out of its box, the iRiver’s strange, pinstripe-patterned surface comes covered in hard-to-peel-off stickers. Its accessories are fresh from being fished out of vats of lumpy, black molten plastic by stoop-backed Chinese political prisoners with electrodes clamped to their nipples. The manual boasts of the iRiver’s “extraordinarily sleek design”. It is as sleek as a yak.

I have complained (to outrage from the iPoderati) about the problems I had using iTunes, the computer software that comes with iPods, but must admit that the software that comes on iPods—so that you can actually operate the things—almost lives up to the almighty hype surrounding its usability.

I would never say the same of the iRiver operating system, yet another dimension of iRiver fugliness. The interface is hellish. The colours are garish. The documentation is in Engrish:

“Images and Text are OK!”

“Using Browser, you can perform the work connecting to external devices such as digital camera etc.”

“Skip the set period of time while playback.”

But I can play exactly what I like on it: MP3s, WAVs, WMAs, Ogg files; I can view images, watch video, browse documents, store data. I can connect it to just about any modern computer with a USB port, and to a number of different digital cameras. I buy my music. I rip it from CD. I put on my iRiver. I make as many copies as I like. Unlike an iPod (or, indeed, my old MiniDisc player) there is no frustrating and pointless “Digital Rights Management” extending skeletal corporate fingers into my life, slapping my wrist with rolled-up licence agreements. It’s my music. I paid for it. I’ll do what I like with it, thank you very much—including making copies for my friends to listen to—and Apple and Sony and Microsoft can go screw themselves.

A neat example of the iRiver ethos is that the ugliness of the interface to all this free and flexible activity can be fixed by its users. Indeed, iRiver encourages its customers to create, share, and install their own “skins” to change the look of the machine’s display to suit their own sensibilities. So much as glance at an iPod in a non-Apple-approved way and their attack lawyers will subpoena your mother, your hamster, and your three most recent sexual contacts.

I can even use my iRiver with the Devil’s own operating system: Linux. This means that I can apply a patchwork of rebel code to convert Apple’s locked-down music format to MP3s (or, indeed WAVs or WMAs) and listen to iTunes tracks without having to install iTunes. If I wanted to use my iRiver with a Windows machine I wouldn’t have to install iTunes or indeed any other kind of digital cruft to do so. Even upgrading the iRiver’s own built-in operating system is simply a case of downloading a file, unzipping it, plugging in my iRiver and dropping the file onto the machine. After I navigate through some menus and choose “Yes” from the last one the new software installs itself and switches the iRiver off. When I turn the machine back on it’s gone from version 1.07 to version 1.28.

One of the most telling criticisms Mac cult leader Steve Jobs ever made of Microsoft was that its products were “tasteless”. Even now, many technological generations after that verdict, Windows looks like Frankenstein’s monster next to the Apple’s Annalee Call of an operating system. But Windows won. It stole the essence of the Apple desktop. That it did this ineptly was less important than that it was prepared to offer this clumsiness to any hardware manufacturer interested in conforming to IBM standards. Apple stayed beautiful and aloof. Microsoft was anybody’s.

My iRiver is a shamelessly promiscuous, eager-to-please, shaggy mongrel of a machine. It rocks in a way the Ice Queen, best-in-show iPod—as pretty as it is—never will. 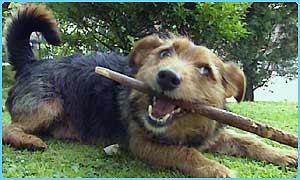 an ill-bred dog with a stick

And, most importantly for a digital jukebox, it sounds superb.