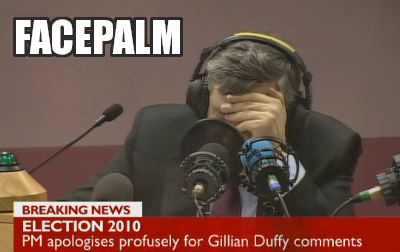 Beam me up, Mandy

“Bigotgate” [Deliver us from the media’s standard scandal suffix!] has come to this: There’s a report on the BBC News Website that actually devotes a paragraph and two full-colour charts to a 30-minute dip in Twitter sentiment towards Gordon Brown in response to his tetchy grumbling to an aide in the back of his official car today. We are only a couple of years away from the media literally disappearing up their own arses, when they will bring us second-by-second reports on the ripples of microblogging stirred by Nick Robinson accidentally farting while interviewing a party leader.

An odd side-effect of today’s fuss has been a spike in visitors to another entry on this blog, one in which I quote Gordon Brown’s predecessor and long-time colleague Tony Blair expressing his own feelings about xenophobic voters:

A friend sent me an email on Saturday that reminded me of a story about Tony Blair during the ultimately victorious 1997 Labour General Election campaign. (Remember, this is when people were still referring to him as “Bambi”.) Perhaps in a bit of a panic about polling figures, the Tories had decided to play the race card as a last gasp measure. One of his aides asked Blair what he was going to do about it. He is supposed to have said,

“Nothing. If that’s the kind of government the voters want, then fuck ’em”.

For me, Gordon Brown’s mistake here wasn’t that he was rude about Ms Duffy, who, let’s remember, said the following to him, without irony:

“You can’t say anything about the immigrants because you’re saying that you’re … but all these eastern European what are coming in, where are they flocking from?”

—which, bigoted or not, is undeniably stupid; it was that he was then grovellingly apologetic about his should-have-been-private verdict on her. His (or his team’s) subsequent backtracking seemed to me less motivated by politeness than by the same fear that prompts representatives of self-described anti-racist parties to respond to local election victories by racist parties by saying things like:

“We cannot dismiss all those who voted for the British National Party today as ‘racist’. Many of them have legitimate concerns that they feel are not being addressed by ourselves in the mainstream parties. We need to go away and think about these issues.”

No. Voting for racist policies is racist. The case for free, but controlled, immigration is sound—just as the case for free, but regulated, trade is sound. If mainstream politicians fail to make it, then mainstream voters will not be persuaded, and the likes of Ms Duffy will continue to spout tribalist nonsense. Despite her claim that her freedom of speech is constrained, the Thought Police haven’t arrested her yet. And I haven’t read a single media commentator suggest that she might have said something worthy of an apology.

I’ll finish with a comment that I didn’t post to the end of a thread on the Facebook page of a Tory friend who registered his approval of the “Gillian Duffy -A BIGOTED WOMAN” page on that site:

Throughout history, talentless and lazy bigots of both the Left and Right have used trade barriers, border controls, closed shops, and plain racial discrimination (both “positive” and “negative”) to protect what they believe to be the most important freedom of all, namely the freedom not to have to compete with talented and hardworking people. History shows us that their cosy dream is wrong and doomed.

UPDATE: This, from a flocking Eastern European is worth reading.