This summary/graphic by Tim Montgomerie of The Times is fun. It imagines the four parties Britain would have if we started from scratch. If we did do such an experiment with voters—if we asked them about real policy choices—I don’t believe that these are the clusters would emerge; most people, especially English people, believe hotchpotches of things that, taken together, have little ideological coherence. It tends to be politics geeks and media commentators who a) can recognize an overarching political philosophy when they see it and b) think politicians should have one. Real people care about getting their bins emptied and worry less about the details of how or why. 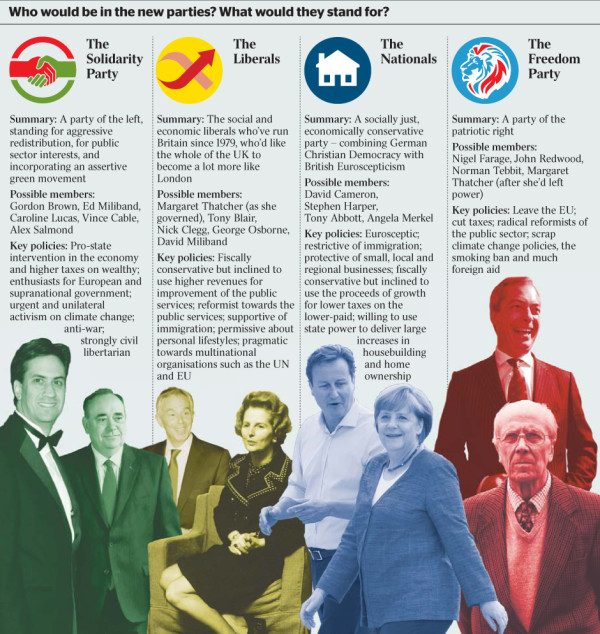 The parties of the scorched Earth

Personally, I’d be a (practical rather than ideological) “(New )Liberal”—except for the bit about wanting the country to be more like London. The summary claims that the people running the country recently have mostly been New Liberals. But most of the parties’ current leaders are behaving as HotchPotchers, even if they aren’t HotchPotchers in their hearts. Since most of the parties are currently led by people who’ve done little in their adult lives other than study or practise politics, this is either strange—surely people who care so much about ideology would want one of their own?—or not strange—if your livelihood depends on persuading an electorate of HotchPotchers, that’s what you’re going to try to do and (appear to) be, regardless of your intellectual tastes.